Modern inverters that convert DC battery power to AC power are able to supply many of the loads commonly found on boats and RV's. These loads include microwaves, lighting, entertainment, and general-purpose outlets. Appropriate loads for an inverter are those that consume small or modest amounts of power and are run for an extended period of time, or large loads, like a microwave, which run for a short amount of time. Some loads are not appropriate for use with an inverter: electric hot water heaters, air conditioners, electric ranges, or other devices that consume significant amounts of power and can be of long duration.

Separating these two load groups is not difficult. To accomplish this task, establish a separate load group (sub panel) in the distribution system. The one line diagram below (Illustration #1) shows the concept. The main AC breaker (or breakers) in the distribution panel is supplied by the shore power or the generator. The shore power/generator source switching may be done on the panel, either with a separate panel or switch, or with an automatic transfer switch; in all cases the main AC bus is supplied from a source other than the inverter. All of the non-inverter appropriate loads, such as the hot water heater or the air conditioner, are supplied by this bus. The inverter appropriate loads, such as the TV or microwave, are supplied from the Inverter Load Group. 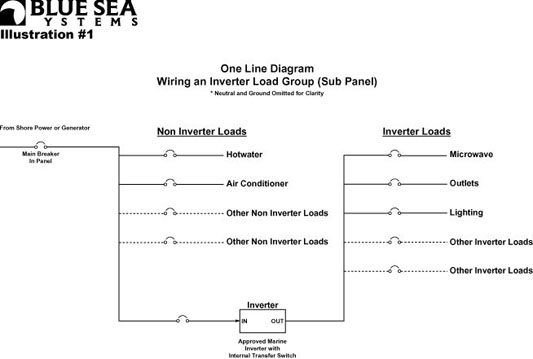 The drawing below is included with Blue Sea Systems panel, part number 8085. It is a combination AC/DC panel and the physical bussing, breaker outlines, LED wiring, and other components are shown. This discussion focuses on the AC center section ignoring the DC section completely. 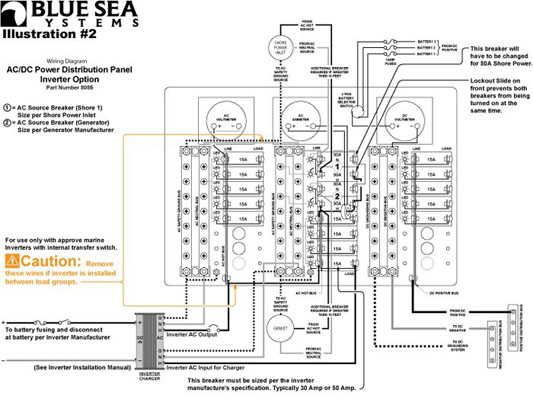 In this panel there are two double pole breakers, which serve as main breakers for the incoming AC Shore Power and a Generator. There is a lockout slide on the front of the panel, which prevents both breakers from being turned on at the same time. The main AC bus is fed from the output of these two breakers. The last breaker on this bus supplies AC input to the inverter.

CAUTION!! The 8085 panel comes with a jumper installed between the center load group (the main AC bus) and the left load group (as viewed from the back of the panel). THIS JUMPER MUST BE REMOVED TO AVOID DAMAGING THE INVERTER! Removing this jumper between the two AC load groups allows the left group to be supplied from the output of the inverter. If it is not removed and the system is powered up, it will result in "back feeding" the inverter by supplying AC power into the inverter output. This may destroy the inverter and may not be covered by warranty.

The Inverter Input circuit breaker must be sized to carry the full rated current of the inverter's internal transfer switch, which are typically rated at 30A or 50A. Check the inverter manufacturer's installation manual for the required circuit breaker rating. Upgrade breakers for Blue Sea Systems panels are available from most marine dealers.

Note also that there are three input wires and three output wires shown for the inverter. These must be hooked up as shown. Marine inverters in the US ground the neutral internally when they are supplying power and simply feed through the ground when shore power or the generator supplies the system. Therefore, to ensure a safe system, you must hook up six wires: the input hot, neutral, and ground, and the output hot, neutral, and ground.

While this bussing arrangement is shown for a specific panel (8085) because there are two AC busses available in it, the same arrangement could be accomplished using a completely separate panel and feeding it from a main AC panel. Blue Sea Systems part number 8059, for example, could easily serve as an inverter sub-panel.