What is circuit protection?

What is the CPD protection against?

Prevention of wire conductor overheating and resultant burning of the wire insulation is the primary reason to install a fuse or circuit breaker. In some cases they are also installed to protect electrical or electronic equipment from damage.

How does fire start in an electrical circuit?

How much amperage can a wire safely conduct?

The American Boat and Yacht Council (ABYC) publishes the following table showing how much amperage each size wire can carry: 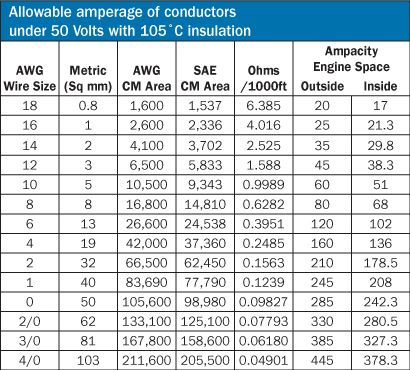 Is “Allowable Amperage” the only thing to be considered in sizing a wire?

How is Voltage Drop determined?

There are tables published by ABYC that use the formula below to calculate Voltage Drop. If the tables are not available, Voltage Drop can be calculated using the formula:

If the wire is properly sized, why is a CPD necessary?

Even though the correct wire size is used for the amperage that is to flow through the wire normally, the circuit may be accidentally grounded, allowing a dangerous amount of amperage to flow. A circuit can be grounded by a wire’s insulation chafing through and contacting a grounded conductor, by the failure of equipment in the circuit or by accidental grounding of the circuit during maintenance.

How does the CPD stop the amperage flow?

There are two primary methods that CPD’s use to determine that excess amperage is flowing in a circuit. Thermal devices open to break the circuit and stop the current flow in response to heat generated by the excess amperage. Magnetic devices react to a magnetic field created by excess amperage.

How do fuses and circuit breakers differ?

Fuses are thermal devices that open the circuit by utilizing a “fusible link” that melts at a known amperage in a known length of time. Circuit breakers can be either thermal or magnetic devices or a combination of the two.

Are fuses and circuit breakers interchangeable?

The short answer is yes. The longer and more accurate answer is more complex and beyond the scope of this discussion. As amperage ratings increase, circuit breakers become relatively more expensive than fuses. Generally, fuses are less expensive for a given rating, but circuit breakers are re-settable and don’t require the purchase of spares, as do fuses. Also, circuit breakers can be used as switches.

Are thermal circuit breakers appropriate for marine use?

Yes. It is sometimes argued that this circuit breaker type is inappropriate for marine use because it is affected by temperature—that is, the hotter the ambient environment (such as an engine room) the lower the amperage at which the device will open, leading to undesired trips. The percentage by which the rated amperage lowers in normal operating environments is usually in the 10 to 20% range and when properly sized the risk of “nuisance trips” is remote.

What wires need to have CPD’s installed?

The ideal answer is that every wire in the boat needs to be protected by a fuse or a circuit breaker. The CPD must be correctly sized to the wire it protects. Typically, wires branch away from the batteries or other power sources and become progressively lighter. Smaller CPD’s must be installed at the beginning of a smaller wiring run, if the wire ampacity is lower than the rating of the last CPD.

ABYC Standards exempt wiring between the batteries, the main battery switch and the starter motor. These wires can also burn if too much current flows through them, however, it is often not practical to provide such protection. The diagram below shows the ABYC Standards for CPD placement. Measure­ments are maximum lengths between the point of connection and the CPD. All 7” dimensions may be increased to 40” if the conductor is enclosed in a sheath or enclosure in addition to the wire insulation. 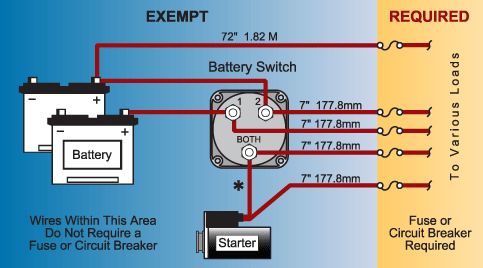 What size CPD is required?

What is Amperage Rating?

What is Opening Speed?

“Opening” is a term used to describe a mechanical action by which the fuse or circuit breaker stops the current flow by “opening” the circuit. Fuses are described as opening by “blowing” and circuit breakers are described as “tripping.” Opening speed defines the relationship between the percentage by which the fuse is operating over its Amperage Rating and the length of time that will be required for it to open. The opening of a fuse or circuit breaker is determined not just by the amperage rating, but by the amount of time and the percentage over its amperage rating at which it is being operated. There are other factors such as ambient temperature that influence a fuse’s opening, but they are not significant enough to be included in this discussion.

Why is opening speed important?

When a circuit is activated, there is an initial surge of current (amperage) that the CPD must allow to pass without tripping the CPD. The two screen reprints below from the Blue Sea Systems’ testing system illustrate the difference in inrush currents between inductive (like motors) and resistive (like light bulbs) loads. 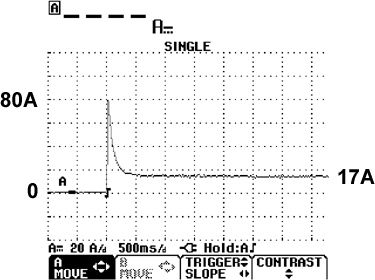 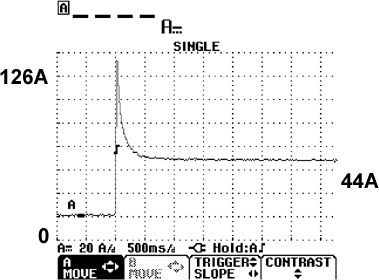 What is Interrupt Rating?

The interrupt rating specifies how much current the CPD can safely handle in short circuit situations. See the ABYC tables I and II (combined) below for determining what minimum interrupt rating is required. 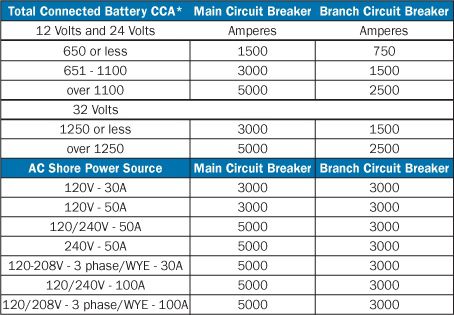 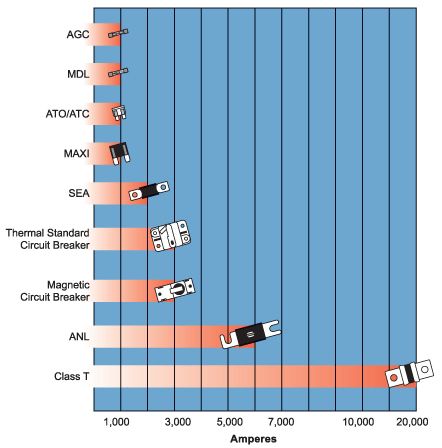 What is Voltage Rating?

The voltage rating specifies the maximum voltage for the circuit in which the fuse is used.