September, 04 2002
Found this article helpful?
Get the latest when you sign up for our newsletter!
Follow @BlueSeaSystems

An alternator field disconnect is used to protect the diodes in an alternator when the battery switch is inadvertently turned to the "OFF" position. Essentially it turns off the alternator output. Below is a description of the operation of an alternator and how the AFD works.

An alternator is basically an AC generator powered by the engine. It consists of electromagnets mounted on a rotor spinning inside windings of wire, called a stator. A relatively small field current is supplied to the rotor, powering the electromagnets to create a magnetic field. When the rotor is spinning and a field current is supplied to the rotor the alternator generates AC current.

There are typically three separate windings of wire in the stator positioned so the AC current generated for each winding is out of phase with the others. This allows a smoother, more continuous output.

There are typically four connections on the alternator, an output terminal to the battery, the ground terminal, the field connection, and a separate connection to the stator.

The AFD is constructed in such a way that the AFD switch does not close until slightly after the main switch contacts have closed and it opens slightly before the main switch contacts open. This insures that there will always be a path for the alternator's output current when the alternator is producing power. The field disconnect will only work on alternators with an external regulator. The diagram below illustrates the connections. Blue Sea Systems battery switches 9002 and 9004 have an AFD. 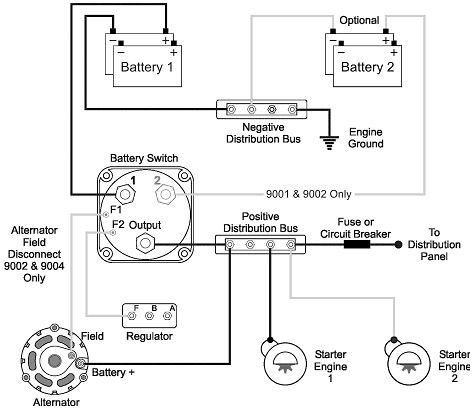